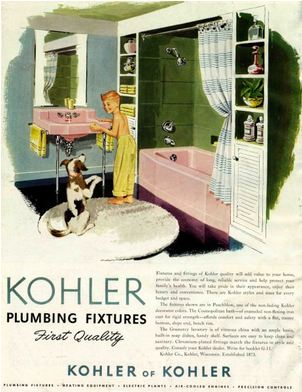 Real men DO have pink bathrooms. You see, a university professor, Jo Paoletti of the University of Maryland, actually has done extensive academic research studying why the color pink today has come to be associated with girls and the color blue, with boys. Seems like the shift did not begin until the beginning of the 20th century and even then, it took until after World War II for this yet-another gender distinction to become entrenched. Before that, parents used a variety of colors for their children’s clothing and rooms. So, in the 1930s, when pink bathrooms started to appear, I surmise that pink did NOT mean girlie or effeminate — it just meant “lovely.” The University of Utah Press will publish Jo Paoletti’s monograph, Pink and Blue: Telling the Boys from the Girls in America, in 2010. Ad: Kohler, 1954.

2021 Update: After nearly 15 years of blogging about the retro, I have stepped back from posting regularly, and have closed comments. Enjoy all the wonderful comments over the years! Hooray for pink bathrooms!

2021 Update: After nearly 15 years of blogging about the retro, I have stepped back from posting regularly, and have closed comments. Enjoy all the stories and wonderful comments over the years — and read more on my main blog, RetroRenovation.com! Hooray for pink bathrooms!