How did America end up with 5 million pink bathrooms? Credit goes to: A super-efficient military wife with sparkling blue eyes.

Mamie Doud Eisenhower had a tried-and-true method for setting up new households as she traveled the world with her husband the General. She knew she looked good in pink. Put the two together and ultimately you get: Mamie Pink bathrooms all across America. Five million is my conservative estimate. Maybe even 10 million, a reader yesterday estimated. Today we dive into the story of how Mamie Eisenhower led us down this primrose pink path. Above: 1960 Christmas card made by Hallmark for Mamie. All images in this post courtesy The Eisenhower National Historic Site.

Mamie Doud Eisenhower was First Lady to President Dwight D. Eisenhower from 1953-1961. But before that, she was wife to Ike the General, and they moved from base to base constantly. In a recent interview with Carol Hegeman, Supervisory Historian at the Eisenhower National Historic Site, I learned that whenever Mamie and Ike moved to a new posting, Mamie carried her favorite color samples with her so that she could efficiently set up a new yet familiar household. With no fuss and little muss, Mamie had her home sweet home – over and over again.

“Throughout all their military moves, she would carry a stick of wood with her favorite colors – green, pink and a creamy color – and use them again and again in her military housing,” explained Carol. “She could get rooms painted, roll out her rugs, and instantly call it home.”

Mamie brought the same palette to the White House, her penultimate home. And it was here that her preference for pink really caught the eye and the imagination of America. The public fascination with pink got its start when Mamie wore a pink gown studded with pink rhinestones to Ike’s inauguration. The gown is quite famous. She then proceeded to decorate the White House with so much pink that the White House press corps referred to the place as “The Pink Palace.” The pretty pastel, which is now iconic to 1950s decorating, became known at “Mamie Pink.” 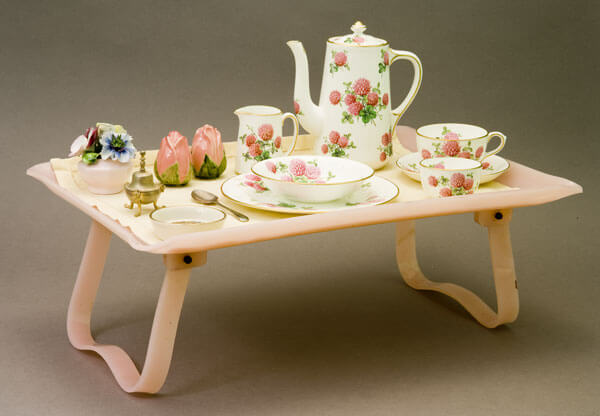 Mamie’s tea tray, Gettysburg. “Mamie believed that once a woman reached the age of 50, she was entitled to stay in bed until noon.” Hey, count me IN.

I am not an academic, but from looking at kitchen, bathroom and other marketing materials from the postwar era, it seems pretty clear that the penchant for pink in the home – especially bathroom fixtures and tiles but also kitchen appliances and then cabinets – was at a frenzy from about 1954 through to 1960 or so. It still existed well into the 60s, but at a less rampant rate. In the 60s, America and its color choices were sobered by the Cold War, JFK’s death, environmentalism and the plain old pendulum swing of color trends. We’ve also seen pink bathrooms from the 1930s, but these were not the “golden years” for this color or for bathrooms in general due to economic circumstances. The thing about pink bathrooms from the 50s is that they came hand-in-hand with America’s postwar middle class boom — in that sense, they are almost emblematic.

The living room at Gettysburg.

From 1953-1956, Mamie and Ike also built their retirement home, a farm, in Gettysburg, Pennsylania. This is today’s Eisenhower National Historic Site, operated by the National Park Service. The couple built a new house, starting with the salvageable portion of the original 1840s farmhouse. And sure enough, Mamie used her same favorite color palette. 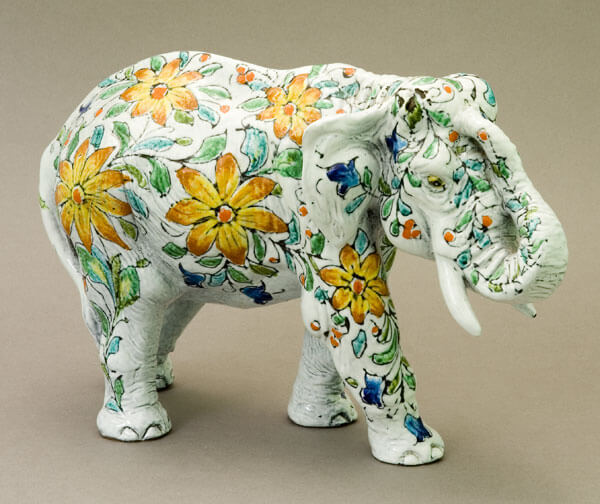 circa 1950 Elephant figure. Ike was apolitical during his military years, but ran as a Republican in ’52, the NPS site says

She also used furniture that she had since the 20s and 30s, getting old favorites refinished or slip-covered. Mamie was a woman knew what she liked. And, she had lived through the Depression – it sounds like she didn’t want new stuff that she didn’t need. 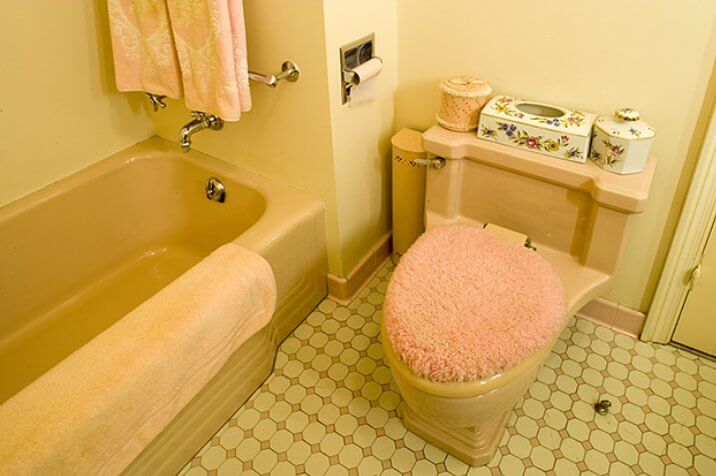 Of course, her bathroom was pink.

And there is pink in the bedrooms and her dressing room. 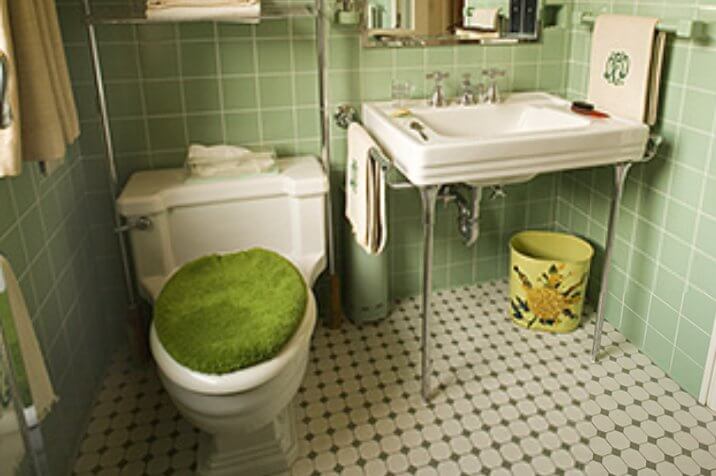 Why pink?
Carol has been with the site since 1980. But – I don’t think she has ever been peppered by so many questions about Mamie’s predilection for pink. And of course, she chuckled right away when she heard about SaveThePinkBathrooms.com and how Mamie is the patron saint.

Why did Mamie like pink so much? Carol answers, “I’ve done a lot of oral histories with the family and associates and I remember Barbara (Barbara Eisenhower, Mamie and Ike’s daughter-in-law) telling me that she [Mamie] liked pink because she realized she looked good in it. It flattered her coloring. Nancy Reagan liked her red, Mamie Eisenhower liked her pink.”

Carol says that Mamie had sparkly blue eyes, and that pink set them off. She simply enjoyed the color. 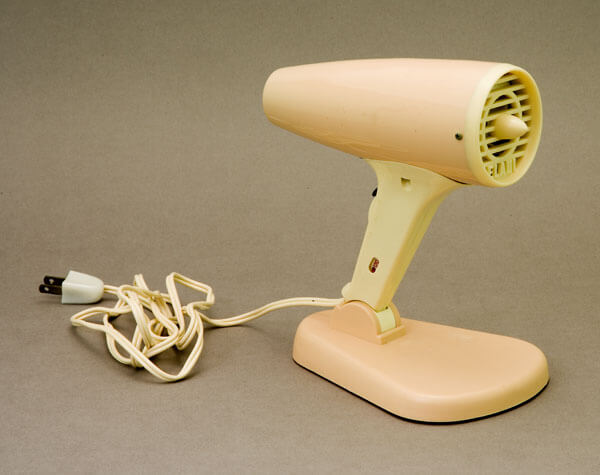 Hey, you know how Michelle Obama got all that grief for her gorgeous arms? Well, Mamie also got criticism from the press for her pink, Carol says. She did wear some other colors, but ultimately would come back to pink – because she liked it.

What do folks visiting the Eisenhower site say about the Mamie Pink bathroom they see there? Carol says, “People do mention it a lot because they remember it back to the bathrooms when they were growing up.” I quiz her further on colors. “Colors get popular. Colors do go in cycles. In the 80s we saw pink and greens again. We go through the palettes. Olives…golds…rusts…they’re coming back again. The 60s and 70s colors are in vogue again.”

Mamie and the 50s
Mamie Eisenhower was immensely popular in the 1950s. Beloved. The Historic Site says in its online virtual tour that:

1950s America had a First Lady with whom it could truly identify. Mamie shared the country’s popular interests and middle class values. She made a home in the White House and at the Gettysburg farm for Ike and her family.

Marilyn Irvin Holt’s biography “Mamie Doud Eisenhower: The General’s First Lady” was released in 2007. In an interview* at the time, she said:

People try to dismiss Mamie in today’s world. She always referred to herself as a homemaker but she was not living the ‘happy days.’ I find her more enlightened than the stereotype of the 1950s.”

I’m very grateful for the opportunity to get to know more about Mamie.

2021 Update: After nearly 15 years of blogging about the retro, I have stepped back from posting regularly, and have closed comments. Enjoy all the wonderful comments over the years! Hooray for pink bathrooms!

2021 Update: After nearly 15 years of blogging about the retro, I have stepped back from posting regularly, and have closed comments. Enjoy all the stories and wonderful comments over the years — and read more on my main blog, RetroRenovation.com! Hooray for pink bathrooms!